I want to show you one of the best surfer core exercises…… but first a small amount of preaching. “Core” is a word that gets way too much abuse in the fitness industry, and proper ways to train your core functionally are even more of an abuse.

Face it, a bunch of crunches aren’t going to help your surfing! So what should you be working on? And why aren’t crunches a good idea? 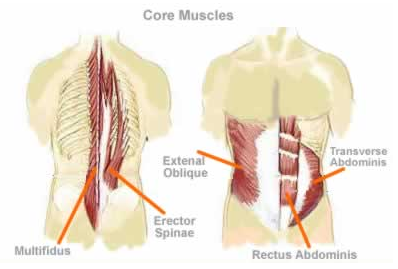 Often when people say core, they are simply referring to abs. There is a lot more going on in the core / torso than just the rectus abdominis.

While crunches will make you “feel” those abs working, they are not training your torso to work functionally, or optimally, and definitely not powerfully.

The pic on the left shows several of what is often termed the core… some people would also say your glutes and adductors are part of the core as well, I would agree.

What I want you to realize is that there are many muscles that comprise the “core”, and these muscles operate to stabilize your spine, and transmit power and strength from one extremity to another.

The core stabilizes spinal extension, flexion, and rotation, and prevents excess movement that may hurt the spinal cord. To boost your performance, you need to train the core to get strong and powerful in the manner it is designed for.

One such manner, that is a HUGE benefit for us surfers is anti rotation. Start with a look at these anti rotation core exercises.

Those movements train your core to stabilize, which it needs to do really well before it can produce large amounts of power and strength without fear of injury.

If you’re core cannot effectively stabilize the lumbar spine in rotational movements, how do you expect to throwdown a full-speed cutback without tearing apart some inter-vertebral tissue (that would really suck)?

Think of how this could benefit quick turns, fast changes of direction, and speed and rotation of a tight backhand lip smack…. WAPAWWWW!!!!! (thats the written sound of a lip smack!!!)

Keys to the Paloff Press How To Improve Your Surf Fitness Training Foundation Training – You Need to Use This

End of Year Froth Sale 30% OFF 🔥
Grab Your Program
x